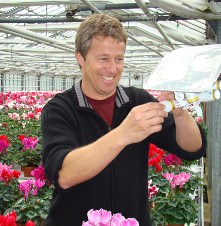 Peter Sprünken’s nursery in Straelen-Holt (Germany) is specialized in the production of Argyranthemum and seedlings of Cyclamen. In 2012, Peter Sprünken tested OrnaProtect in heated greenhouses in over half of his operation units. Attacks from the foxglove aphid and from the peach potato aphid on Argyranthemum were well controlled in the spring as were those of the cotton aphid on Cyclamen later in the season. In the greenhouse under conventional pest management, two chemical treatments were necessary to control aphids. Retrospectively, Mr. Sprünken said: “OrnaProtect is a really good concept. As I produce different plant species, several species of aphids can cause problems. This year, thanks to OrnaProtect, aphids, whatever the species, were no longer a concern. “