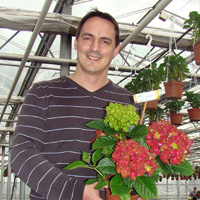 The hydrangea nursery Pellens GmbH in Geldern, Germany, produces annually 1.500.000
hortensia, out of this 80% as raw material. The 30 coworkers of the company care about more than 40 different varieties, which grow up on 17 hectares.

Managing director Andreas Pellens used OrnaProtect in the greenhouse from January to October 2011. During the cooler season the green-spotted potato aphid (Aulacorthum solani) was observed. This aphid species has been controled by OrnaProtect, as were all other different aphid species appearing later in the season.

Retrospectively on the year Mr. Pellens says: „The application of OrnaProtect is simple and can be accomplished – contrary to chemical treatments – by untrained personnel. By using a cocktail of different aphid ennemies I save labor and thus expenditures for monitoring and for aphid identification, which so far was necessary for the use of parasitoid wasps. For me, OrnaProtect is a convincing concept. “